Cat Among the Pigeons by Agatha Christie (1959) 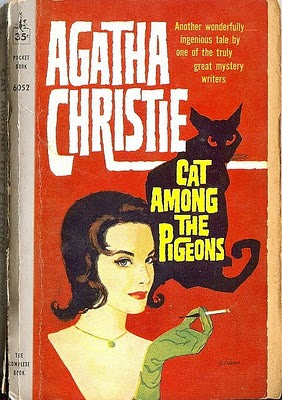 The always amazingly awesome Dan likes to read Agatha Christie books, and since she wrote so many of them, he sometimes accidentally buys one he already has. This worked out great for me, because he recently gave me his extra copy of Christie's Cat Among the Pigeons (1959), and I've really liked all the Christie I've read so I was quite happy to read it.

Cat Among the Pigeons takes place at Meadowbank, an exclusive English girls school run by the formidable Miss Bulstrode. But it starts in the middle eastern kingdom of Ramat where the ruling price is about to be ousted in a revolution and asks Bob Rawlinson his best friend, pilot, and friend from his school days in England to take care of his family nest egg -- a small but very valuable cache of exquisite jewels.

At the start of the new term at Meadowbank there are many returning students and staff, as well as a few new faces. However, not everyone is what they seem on the surface, and at least one of them is a cold blooded killer. When a school mistress gets in between the killer and the treasure, the murders begin.

Christie does a wonderful job of drawing a convincing proper boarding school and juggles the personalities and motives of a couple dozen characters masterfully. The key to the mystery isn't too hard to figure out, but there are a couple of secondary twists that are very satisfying and no pesky loose ends are left at the end of the book. This is billed as "A Hercule Poirot Murder Mystery," and Poirot does show up in the last third of the book to perfunctorily sift through clues and explain it all for us. I really like the character of Poirot, but in this book his presence seems tacked on and unnecessary and he really isn't given much to do.

So, don't read this one for the Poirot angle, but do read it for a satisfying mystery with a complex stable of characters and an oh-so-British setting. Thumbs up!

[Note: this isn't the cover of the book that I read, which is an 80s-tastic Pocket Books edition, but I like this one better. Photo credit.]
Posted by Spacebeer at 1/17/2011